As we shelter in place during this pandemic and eagerly await the time at which it’s safe for production to resume on Netflix’s The Witcher, The Path is still hard at work generating content to hold you over until Geralt and Co. return. Today we bring you the first in a series of glorious listicles containing all-manner of Witcher factoids: Ten Things The Witcher Netflix Changed From The Books. Enjoy.

See Vilgefortz here, about to smash in the head of one of his wounded “allies”? Well, in the books it was established earlier on that Vilgefortz was one of the fiercest mages in the Northern kingdoms, easily capable of outclassing Geralt in a fight:

“A few weeks later, having been healed by the dryads and the waters of Brokilon, Geralt had wondered what mistakes he had made during the fight. And came to the conclusion that he hadn’t made any. His only mistake was made before the fight. He ought to have fled before it even began.”1The Time of Contempt 195

This makes him losing a fight to Cahir in S1E8 all the more, well,  ridiculous. As Vilgefortz himself puts it, attempt to stand against his might, and “you’ve pissed into a hurricane.”2The Lady of the Lake 363

While she is mentioned several times in The Last Wish 3The Last Wish 26 and Sword of Destiny4Sword of Destiny 358-359, Triss doesn’t appear until the first Witcher novel proper, Blood of Elves. Her affair with Geralt, which also occurred years before the Massacre of Cintra in the books, was postponed (presumably) till later seasons. Her introduction in season 1 can likely be attributed to “fan service”, as they say, as her character is immensely popular due to her role in CD Projekt Red’s video game trilogy, especially The Witcher 2 and 3, where she looks like a bit of a fire hydrant.

3. Ciri And Geralt Had Already Met

In the Witcher book Sword of Destiny, Geralt returns to Cintra some six years before the Nilfgaardian invasion, but renounces the Law of Surprise5Sword of Destiny 334-347. Approximately four years later, he meets Ciri in Brokilon Forest while serving as an envoy for a local king (as he had done in the past on several occasions). She had run away from a marriage arranged for her by Calanthe. After saving her from bandits and a monster in Brokilon, Geralt begins to establish a bond with Ciri, but ultimately leaves her to spare her the life of a Witcher6 Sword of Destiny 247-313. When Yennefer later sends him to retrieve Ciri, Nilfgaard invades Cintra before he can reach the capital and he gives up Ciri for dead.7Sword of Destiny 366-371

It’s only after all this and the Battle of Sodden that Geralt saves the life of the merchant Yurga and discovers Ciri is still alive. People linked by Destiny will always find each other.8Sword of Destiny 313-374

While Cahir is still a Nilfgaardian soldier in The Witcher Saga, in the books he’s more akin to an intelligence or special forces agent than a field commander. After losing Ciri during the Massacre of Cintra, Cahir was imprisoned for failure and spent much of the next two-to-three years in a Nilfgaardian dungeon. He was ultimately freed by Emhyr Var Emreis and sent to capture Ciri once more9Blood of Elves 293 but, due to a complicated set of circumstances,  later wound up becoming one of Geralt’s closest allies. Yep. That Cahir.

Nope. Nor were they “a shitty backwater” until the arrival of Fringilla Vigo. In the books, Nilfgaard is the largest and richest polity on the face of the Continent. Their lands (except Toussaint) are largely devoid of monsters and face more trouble from internal dissatisfaction and brigandage than any post-Conjunction beasts. Despite being more tolerant towards non-human races and less misogynistic than the North, however, Nilfgaard is still an absolute monarchy that rules with an iron fist. Still, think more in terms of Germany during the World Wars than anything resembling modern religious fundamentalism.

You’ve probably heard this one before, but Geralt was quite eloquent and prone to philosophical discourse in the books. This annoys some people, who are dumb. To compensate for a more multipolar narrative that afforded greater screen time to Ciri and Yennefer than they have at this point in the books (The show has mostly covered The Last Wish and Sword of Destiny by now, with small bits of Blood of Elves), Henry Cavill emulated Doug Cockle’s iconic performance from the game trilogy to develop a distinctive voice and mode of expression that allowed him to say less with more. Do I like this? Hmm…yes. But he sounds a bit too much like Christian Bale’s Batman at times.

8.We Never Saw The Battle of Sodden

Although referenced frequently in the books11Sword of Destiny 356; Blood of Elves 100, 134-135, 270, 279, The Battle of Sodden, like the Battle of Marnadal, was never directly depicted on page. No major military engagement until The Battle of Brenna in The Lady of the Lake was, in fact12The Lady of the Lake, Chapter 8. The Battle of the Bridge in Baptism of Fire is dismissed by Sapkowski as an inconsequential skirmish, and conforms to this description, given its small scale and negligible geopolitical ramifications. While Yennefer and Co. are stated to have faced off against Fringilla and Nilfgaard in the books, they did so at the head of a Northern army, not alone13Sword of Destiny 356; Blood of Elves 270. Additionally, Sodden Hill was not a fortress but a simple hill  on the battlefield subsequently named The Hill of the Fourteen for the fourteen mages who perished there, and it was implied to have been all of the 22 mages under Vilgefortz, not just Yennefer, who turned the tide14Sword of Destiny 356. Vilgefortz was given most of the credit for the victory and used his power to dominate the Brotherhood15Blood of Elves, 279-280, 311. Yennefer, while important, was merely a supporting player, though her participation did earn her a seat on the Council16The Time of Contempt 118.

This one is complicated. While Yennefer is indeed traumatized by her infertility in the books, her upbringing was even more abusive than in the show17The Tower of the Swallow 319-320, and she would clearly rather be a sorceress than not. The Council exert much less micromanagement of sorcerers’ and sorceress’ lives than in the show outside of political affairs, and it’s suggested that the sterilization policy has been relaxed since Margarita Laux-Antille (one of Yennefer’s contemporaries) ascended to the rectoress-ship, given Yennefer’s insistence on training Ciri as a mage and other context clues18Blood of Elves Chapter 7, The Time of Contempt Chapter 1-3. Nor is it entirely clear whether Yennefer was forcibly sterilized or simply lost her fertility as a side effect of ascending19Sword of Destiny 115. She does not blame the Council, and her enmity towards what may be called “Big Magic” doesn’t really develop until the founding of the Lodge of Sorceresses after the fall of the Council, when she explicitly invokes Tissai De Vries as an example of the justice of the Council versus the cynicism of the Lodge under Phillipa Eilhart20The Lady of the Lake 484. Yen is a loyalist. 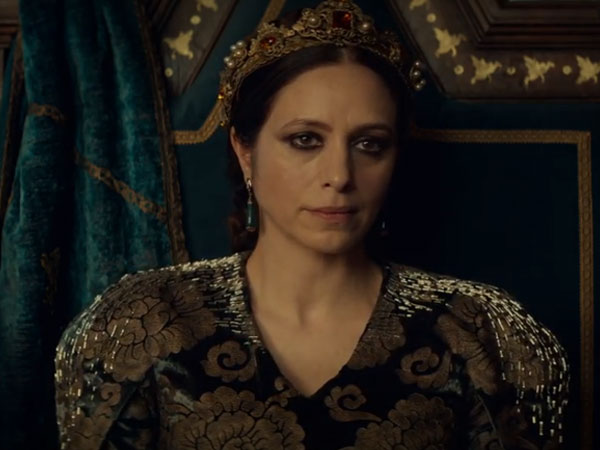 Jodhi May was impeccable as Calanthe, and the writing of her character is largely true to the books. However, in order to explain the humans’ oppression of nonhumans in a concise manner, Calanthe was portrayed as an oppressor of elves. Calanthe in the books is more of an oppressor of “anyone who fucks with Calanthe”, and doesn’t care much about race at all.

Every other change made to Cintra in the show was entirely positive however. In the books, Eist and Mousesack are basically non-entities who are mostly referenced rather than seen (Eist) or do very little (Mousesack)21Eist bears almost no relation to his book counterpart, and appears only on-page in the short story “A Question of Price” from The Last Wish. Mouseack is essentially a humorless old man lacking in his show counterpart’s affection for Ciri, affability, and camaraderie with Geralt. The show turned Eist into a “dirty-grandpa” type (fitting for a Skelliger) and greatly expanded Mouesack’s lines and depth of characterization. We also never actually saw this:

In the books. We’re told Calanthe is a great warrior22Sword of Destiny 369-370. But telling isn’t the same as showing.

If only every time they went off-book it had been this good. Sigh.

Published by The Second Stylus